In 1995 there were only four NAPO National Professional Organizers in the State of Connecticut, two of which met at a regional conference in Albany, NY sponsored by the NAPO-NY chapter. A friendship blossomed and they continued to meet monthly throughout the subsequent years to share issues that developed as their organizing businesses grew. Over the following months, several more organizers joined this casual gathering as word spread that this was the place to be if you are serious about your organizing business and want support from colleagues.

Monthly breakfast meetings were held at the Holiday Inn in North Haven under the restaurant’s leaky glass roof. Finally, the Holiday Inn offered a private room with a breakfast buffet. This room was sufficient for a while until our numbers continued to increase. We were finally moved into a larger room where we continued to meet for several years.

In January 1998 the official Connecticut Informal Group was recognized by NAPO National. Over the years this group of organizers developed into a cohesive assemblage with monthly meetings, educational presentations, seminars and National Conference attendance.

The hard work of forging forward in seeking chapter recognition began in 2002.  Just to start the process, a requirement of NAPO National was that there were 25 members meeting on a regular basis. We finally hit the mark and proceed with the enormous amount of paperwork and the required documentations including establishing the first Bylaws for the proposed chapter. The moment arrived when we were ready to submit documentations to headquarters for chapter recognition.

In January 2003, the NAPO National Board of Directors announced the official chapter status of the Connecticut organizers. NAPO-CT was born.

The first NAPO-CT Board of Directors consisted of:

And the rest is history! 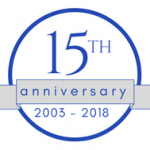